There is no evidence that lateral spasms indicate health problems, but it causes annoying pain that interferes with normal physical activity and exercise. However, scientifically, the cause of lateral spasms has not been pinpointed. 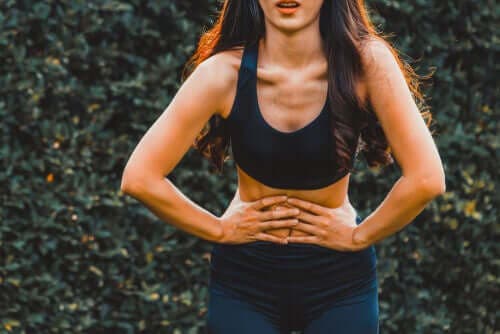 Everyone will have experienced side cramps at least once. Regardless of whether you are an athlete or someone who exercises for fun, side cramps are annoying feelings that bother people. This uncomfortable pain sometimes only calms down when the athlete stops, so it is impossible to continue exercising. Why does lateral spasm occur?

Lateral spasm feels like a sharp pain between the chest and the abdomen. And many people wonder if it is a dangerous sign or a symptom of bodily injury. In fact, the pain can be severe, but that doesn’t mean you should be afraid.

To date, scientists have not found a definitive answer to why we experience lateral spasm. What I found was  a series of theories that could explain this annoying pain.

What is the lateral spasm?

Lateral spasm is a sharp, stinging pain that occurs on the side of the abdomen. It appears suddenly when doing some type of repetitive exercise and often prevents the activity from continuing normally.

Lateral spasm is also called “lateral pull” or “pull,” but the medical name is transient abdominal pain (TAP). Scientists believe that this condition is due to a variety of factors or circumstances, rather than one factor.

These cramps usually appear during the most energy-intensive activities, but they usually occur when running. Traditionally, people have linked food to eating before exercise, but the cyclist eating food during the race seems to be refuting.

Lateral spasm is a severe pain between the chest and abdomen. Scientists have not yet found the cause of this cramp.

There is no conclusive conclusion as to the cause of the side pull. None of the currently available studies clearly confirm the specific cause of this spasm.

However, one of the most accepted theories is that these cramps appear after continued friction or tension in the ligaments that connect the diaphragm to the stomach. This is because the friction can cause irritation of the peritoneum, the membrane that covers the abdominal cavity.

Other studies believe this sharp pain is the effect of shortness of breath. If breathing is difficult and irregular, the body lacks oxygen and the diaphragm itself may be restricted.

Studies have shown that sports that require high energy consumption in a short period of time (for example, sports that compete in speed) tend to cause more side cramps. Physical activities that are most likely to cause these problems in that order are:

Why side cramps get worse

Clinical experience has confirmed that some factors increase the risk of lateral spasm and exacerbate pain without causing direct pull . These include:

It seems that both women and men are experiencing this problem without much difference. Some studies have shown that young people are more likely to experience this problem, and less frequently in older people.

Lateral cramps that occur during exercise can cause you to stop exercising due to the intensity of the pain.

Precautions for preventing side cramps

Although it is not known exactly why this cramp occurs, some methods have been shown to be effective in avoiding or preventing it. Therefore, the following is recommended.

If lateral spasm occurs, the best way is to lower your face and place your hands on the area where you feel abdominal pain. If discomfort persists, you should stop breathing, control and stretch your abdomen.

Everything to Know About Tylenol Lawsuits

Tips on How to Achieve Health Life Balance

Are you Thinking of Building a Career in Nursing? Here’s What you Need to Know

6 Foods to Get Glowing Skin

5 Organs That Detox Your Body